With all the wonderful cities and towns of St. Tammany Parish, there has to be a good reason to leave the Northshore. Of course, I had taken many trips over the Lake Pontchartrain Causeway to indulge in the sights, sounds and flavors of New Orleans. I have never been to the state capital, Baton Rouge. Well, the place whose name translates to “red stick” (supposedly due to the red cypress tree that was a land marker), is really cool. 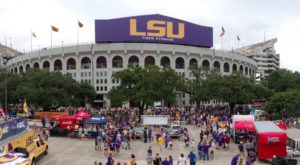 My friend, a big-time LSU fan, had tickets to the Auburn game in Baton Rouge. Being an Alabama grad, I know that anytime two Southeastern Conference teams are playing each other, it is going to be good. Since you can read all the stats and play-by-play on the internet, I will forgo rehashing it. And yes, the game was fantastic and exciting. And really loud. It was a bit confusing hearing, “Go Tigers,” as that is both teams’ mascot. Which brings me to the next thought.

When I saw a directional sign for Mike’s Habitat, I had no clue as to who Mike was and why he gets a special callout. Once my friend’s shock of the question subsided, I learned the interesting history of Mike and the habitat. Mike is the live school mascot, and yes, he has his own living quarters. Should I be bold and inquire why the basic name of Mike? With the likelihood of being further humiliated, I proceeded to ask. The main person responsible for bringing a real tiger to LSU was named Mike. How silly of me to not know this. Read more about Mike and why everyone likes him here.

As with many schools’ pre-game activities, the central gathering place is the Quad. This part of the LSU campus is particularly beautiful. The incredible architecture that borders the Quad varies from Italian Renaissance to Southern Colonial, all set among a plethora of mature oak trees. The iconic landmark of the campus is Memorial Tower, built in memoriam of fallen World War I Louisianans. While we didn’t have the opportunity to go inside, one of the largest collections of art in the state is housed here.

What a treat to experience the extraordinary LSU campus. Yes, college life has changed from my day. Yet at LSU, I have a feeling much is the same.