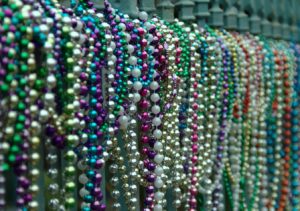 There will be plenty of these to be had during Mardi Gras in St. Tammany Parish.

New Orleans may be the first thing to come to mind in everything that is Mardi Gras. However, the Crescent City does not have a hold on all the fun. St. Tammany Parish knows how to celebrate the season in perfect fashion. After all, the public schools take an entire week off to enjoy the festivities. The following are three places to partake in Mardi Gras fun without crossing Lake Pontchartrain.

In the bustling town of Covington, you get two for the price of one (both free, so really doesn’t matter). Beginning at 10 am in downtown, you will see floats, horseback riders, vintage cars and more at the Lion’s Club Parade. Following right behind is another parade, presented by the Mystic Krewe of Covington. This krewe was founded by the Knights of Columbus and is one of the oldest krewes in the parish. When you have had enough parading around, there is more fun to be had at the Covington Trailhead. You will enjoy live music, food, crafts and games.

If you are itching for more parade action, you can travel down I-12 just a bit to Lacombe. You will find the Krewe of Chahta’s festivities beginning at 1 p.m. Chahta is apparently named by those who attended Chahta-Ima High School over 30 years ago (it since burned down and rebuilt to what is now an elementary school). I’ve been told to expect the unexpected here, so that just upped the ante for me heading over there.

The charming town of Folsom is where you will find the final parade stop in St. Tammany. If you are still searching for that perfect string of beads, here is your chance. With a lineup that includes vintage tractors and horse-drawn wagons, I feel this parade may provide the most old-fashioned, hometown feel. It’s also probably your last chance at free beads on Fat Tuesday!

No matter how you plan to spend Mardi Gras, you can parade around the parish as if you own the place. Or, at least you can do so with some beads around your neck!