On my visit to Baton Rouge for an LSU game some weeks back, I was pleasantly surprised at just how cool this place is. Being just over an hour from the Heart of the Northshore in St. Tammany Parish, I knew it was well worth my time for a second look. 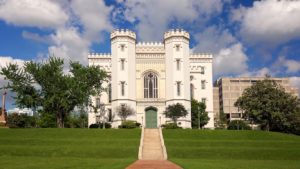 With the Old State Capitol Building’s majestic exterior, I felt like a princess walking into her castle.

My first stop was a visit to the past. The Old State Capitol Building was the site of some significant historic events, including the state’s secession from the Union to the attempted impeachment of Governor Huey Long. This magnificent structure was opened as the capitol building in 1852, only to be taken over by Union soldiers a decade later during the Civil War. Since that time, the building was burnt to the ground, rebuilt, closed and finally restored as a museum.

The exterior is pure grandeur. I learned that while the facade appears to be stone, it is actually bricks covered in plaster. (I still don’t know why that was the case.) The interior is just as beautiful, with ornate furnishings throughout. The extensive artifacts, art and antiques make for quite an enjoyable few hours. I was told you can even spend the night in the basement. That’s a hard pass for me, as I saw the “Ghost in the Castle” movie shown earlier in my tour.

Now it was time to visit the present, and what better way than to indulge in great Louisiana food. While New Orleans is known as a foodie’s number-one, Baton Rouge just might be a close second. The overall recommendation I received for a tasty lunch was Capital City Grill. Let me go on record to say, always listen to the locals! The menu did not disappoint, from the shrimp and corn bisque (go ahead and get the bowl) to the pecan redfish (translates to delicious perfection).

I needed to get back to the Northshore for a meeting, however I knew a return visit would be in order. Thank goodness St. Tammany Parish is so close!