This time of year, New Orleans is taken over with Mardi Gras celebrations. While it is common to refer to the entire season as Mardi Gras, it is actually Carnival, leading up to Fat Tuesday on March 5. In the two previous posts I wrote about three NOLA restaurants and three museums. Now, it’s time to get party-ready with three Mardi Gras must-dos.

New Orleans and the entire area host a multitude of parades. The floats range from classy to over-the-top, yet all with extreme fun in mind. At Mardi Gras World, you will experience first-hand how the elaborate floats are made, along with everything that makes New Orleans’ month-long party so spectacular. This place is full of history, costumes and more. It may seem a cheesy thing to do, but isn’t that what makes it so fun?

Have Your Cake and Eat It, Too 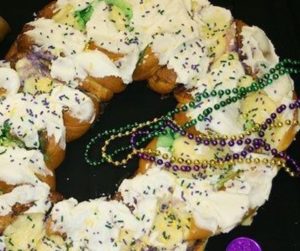 No trip during Mardi Gras is complete without King Cake!

No visit to New Orleans is complete without a slice or two of King Cake, New Orleans’ other official dessert (after beignets). While it is called a cake, to me it’s a ring of deliciousness. While you can find this cake anytime in the city, it seems to just taste better during the season. My favorite place to get one is Manny Randazzo. Be sure to go early in the day, as the line gets long quickly. And, definitely pick up the Pecan Praline King Cake. It is a slice of heaven!

I Love a Parade 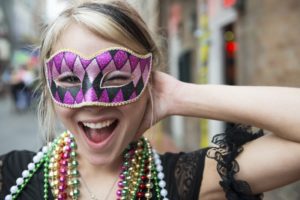 Yes, you can bring the family to parades. Just be ready to cover their eyes!

The parades are likely for what Mardi Gras is most known. And, if there is one thing that stands out most, it is that New Orleans will not let a parade pass you by! The schedule gets bigger and better as we close in on Fat Tuesday. Between now and March 5, there are an additional 61 parades throughout New Orleans and the surrounding areas. While some can get rather “interesting,” there are parades more family-friendly. Check out the full schedule and details here.

New Orleans is a fantastic place to have fun anytime of the year. During Mardi Gras season, it becomes one big fat party!